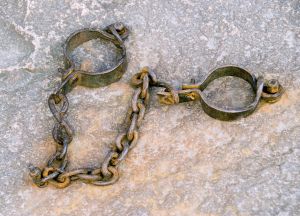 God used the prophet Zechariah to speak an interesting admonition to His people:  “As for you also, because of the blood of your covenant, I will set your prisoners free from the waterless pit.  Return to the stronghold, you prisoners of hope.   Even today I declare that I will restore double to you.”  (Zech. 9:11-12)  At first glance, it seems odd that God would describe freedom from the waterless pit as a life lived as a prisoner of hope.    Our usual concept of freedom is the OPPOSITE of captivity.   However, this admonition to action is actually an encouraging promise!  The word prisoner actually means one who is taken/overtaken/held [captive], according to the etymology of the word.   In fact, pris is the past participle (meaning taken) of the French verb prendre, to take.   If we apply that meaning of the word to these verses, we are compelled to ask ourselves:  What have I allowed to take me captive, to overtake me, to overcome me?   God wants us free from captivity to the waterless pit, which is a place of darkness, a place where we are limited in movement, a place where there is no life or provision for life.   He wants us to live instead as prisoners of hope, to be overtaken or seized or held captive by hope!   We can access hope by returning to the stronghold: taking refuge in Jesus Christ and all He is, abiding in His Presence and a deliberate, conscious awareness of His life in us.   In fact, Peter addresses this same issue:  “…by what a man is overcome, by this he is enslaved.” (2 Peter 2:19b)  What is overcoming or overtaking me?  What is ruling my thought life?  What is holding me captive?   As I take refuge in God — my fortress and strong tower (Psalm 61:3), His presence will cause me to be overtaken (taken prisoner) by HOPE instead of living as a prisoner of the waterless pit!